"1" Step (The Rust Killer) converter Stop rust dead in its tracks! With "1" Step (The Rust Killer) converter treatment, you can neutralize existing rust and create a smooth long lasting primer on both rusted metal and previously painted surfaces. This water based formula works fast with drying times of only 30 minutes – no sandblasting or heavy wire brushing necessary. Get up to 500 sq ft per gallon for unbeatable protection that gives 2-4x the durability than an acrylic or enamel paint without additional top coats! Plus it's safer to use than latex paint - get your FREE SHIPPING & normally ships within 1-2 business days!

For use on: structures, machinery, equipment, vehicles, railings, marine applications, and more. Tens of thousands of successful applications, galvanized surfaces (mixed results, will work but may not change color).

Not for use on: 1-Step Rust Killer is not for stains, aluminum, heated areas like hot engines it is also not to be used on internal surfaces such as the insides of liquid containers such as water and fuel tanks.

5 gallon pail comes with a Reike spout on the lid screw cap. Simply pull the pour spout out. When done push spout back in and screw cap back on.

With over 3,000 glowing reviews by satisfied customers and a quarter-century of experience under our belt, it's safe to trust BUY@IPI for all your product needs. 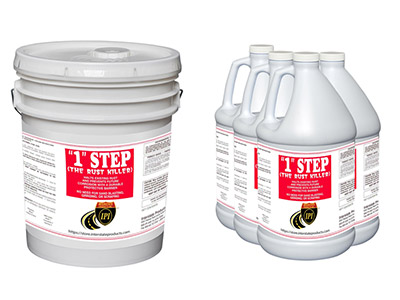 Was:
Price: Now: $327.00
Was:
Rust Converter Product - 346 Stops Rust and Converts It to an Inert, Protective Coating. Converter is a liquid surface conditioner and primer that converts existing rust into an inert, protective...
Rust : AL-346/5

Was:
Price: Now: $287.00
Was:
When surfaces are slippery in your neighborhood, who are you going to call? The IPI TEAM of Experts! Non-Slip Coating - Traction-N-More Epoxy Master Kit - The ultimate in slip proof protection &...
Non-Slip Coating : TZ-20-22-M-6

Was:
Price: Now: $289.00
Was:
When surfaces are slippery in your neighborhood, who are you going to call? The IPI TEAM of Experts! Non Slip Concrete But It Is Easy To Apply!!! Produces a very hard and durable anti slip-resistant...
Non-Slip Coating : TZ-20-33-5